When I was doing a cooking course at the university, I told the Examiner before the practicals that I must get a 1st division because my mother is a good cook :)


Whether I managed my distinction because of that threat or actually because my Chinese fried rice tasted adequately Chinese, I'll never know. What I do know is that it gave me the confidence to light the stove without trepidation; turn it off before the food got burnt & eventually, churn out a meal that was edible, if not heavenly.


Bhai & Tuli were my guinea pigs. From my newly learnt spring roll to the more elaborate nargisi kofta, they lapped it all up. As I soldierly marched on my culinary path, my siblings got used to my passion. They knew they had no escape route and, in time, even looked forward to the new dishes that were coming thick & fast. I don't mean the thick dhokla that refused to fluff or the fast food that slowed down Bhai's digestion. On a kind day I'd give myself a 7/10. Ma would give me a , well...I did get a 1st div, remember ;)

Many years later I met Apar at the workplace. An intelligent Sardar with a passion for cooking & all things creative. We immediately bonded. Whoever says daru & smoking bind people, doesn't know the whole truth. Apar, a bachelor, lived with his flatmate/s & was the Head Chef of his establishment. His kindness was such that he would get food for us in the office despite the different departments & timings we worked in. As with all good cooks, presentation was integral to his dishes.The food looked beautiful & tasted delicious.What gave the food its zing was Apar's passion. Ma always says," Cooking is an art. You have to have patience & passion." Apar exemplified this.


Life has moved on for both of us. Apar is now in Canada & I am in London. Technology binds us together, time zones notwithstanding. When I made ranga alur pantua yesterday, I wondered what Apar was cooking.


Ranga Alu(Bangla) is sweet potato;Pantua is gulab jamun(loosely translated). We make this during makar sankranti, which falls in mid January. Because we make many other dishes then, it normally becomes a whole week of speciality food.Which is how I ended up making it on the 24th of Jan & not the 15th!


You can make ranga alu pantuas any time you want. It is the healthier version of gulab jamun.


Step 1
Cut the sweet potato so it fits into the cooker & cooks faster. 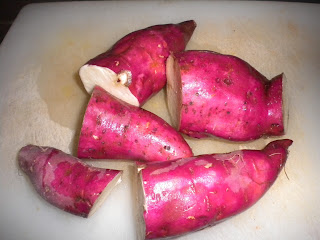 Put the pieces in a pressure cooker & give it 3 whistles on high. If you are using an electric hob like I do, take it off the hob once done. You don't want the potato to overcook with the continued heat. 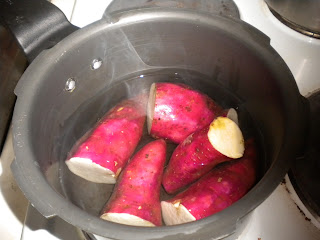 In a saucepan add 3 cups of water & 1.5 cups of sugar & let it boil. Add the 3 cardamoms for essence.
The syrup is thin, not as thick as the traditional gulab jamun syrup.The water almost remains translucent.
The potato boiling & sugar syrup happen simultaneously. They don't need much looking after.


Step 3
Make the stuffing while your potato & sugar syrup are boiling. Time management never hurt anybody:)
Take a little ghee/oil in the pan/kadai/wok. Warm it. 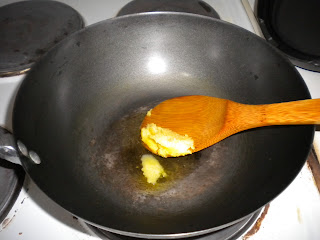 I used semolina/sooji for the filling, not khoa. We are staying away from fat you see ;) 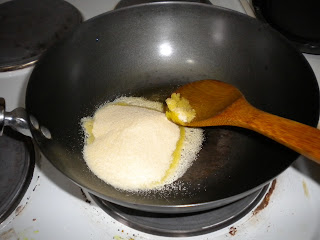 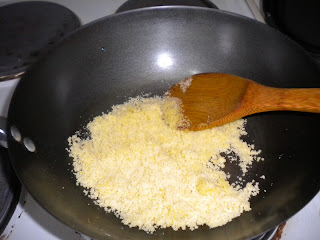 Add coconut powder. I use dessicated coconut from the store. You can use grate fresh coconut if you like. Fry the sooji & coconut mixture till light brown. If you are using khoa, fry the khoa & coconut. 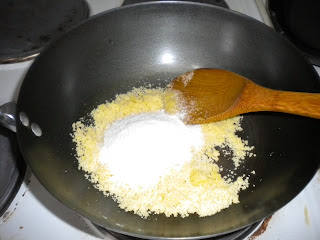 Add sugar to taste. Remember, sweet potato is sweet. So use your judgement on how much sugar you want the filling to have. Also, the fried pantuas will be dipped in sugar syrup. So decide!
Also, if you are using khoa, & not sooji, taste to see if you need too much sugar. Khoa has an inherent sweetness. 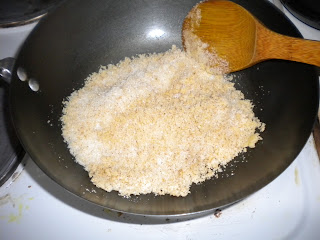 This is how your filling will look once done. Keep aside to cool. 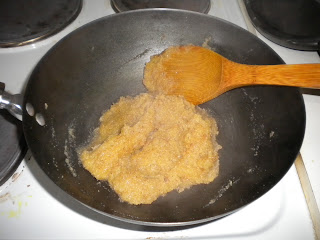 Step 4
This is when you know your potato is done. The inside looks yellowish, the peel loses its jarring pink tone. 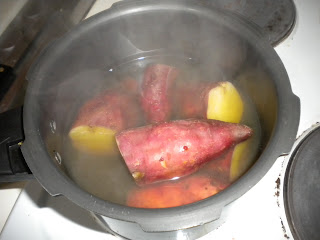 Peel & mash the boiled potatoes & add rice flour/maida just so much that the potato tightens a little. I used rice flour, it gives the pantuas a crispiness that's yum. 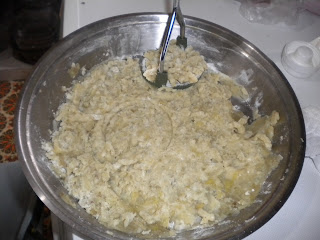 Step 5
Make small round balls with the dough, flatten them on your palm, put in stuffing & make into shapes like below. 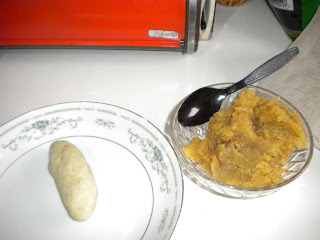 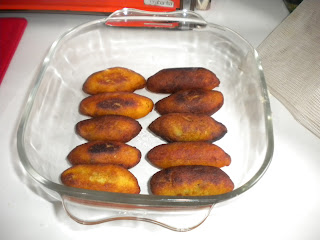 Step 7
By now the sugar syrup is cool. Pour onto the pantuas.
Do not pour hot syrup onto the pantuas, they may break.
The syrup takes on the colour of the pantuas & turns a light yellow now.
You can also make some round pantuas.Put a raisin instead of the stuffing to keep an element of surprise! 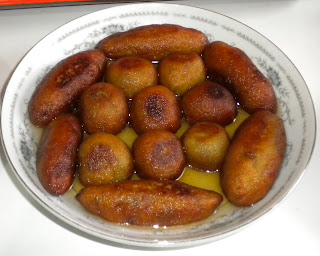 I left a few dry so P could have the best of both worlds. He ate the dry ones as evening snack & the syrupy ones for dessert! The way to a man's heart, I tell you... 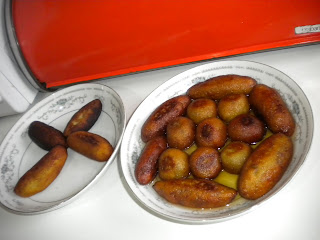 Masi told me to offer any dish I make to God. While faith is personal thing, I thought I must share this with you. I have come to realize that the act gives the dish a sacredness that makes it transcend the mundane & make it a bhog, a dish fit for Gods! The family then eats it more reverentially & you, the chef, feel more satiated.
Try it once. And see the difference. 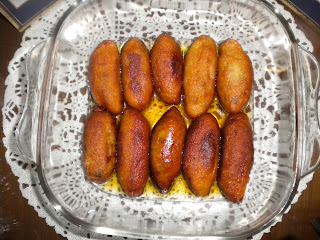 If you need any clarifications, just leave a comment.And I'll get back to you. Go get the sweet potatoes folks! What are you waiting for :)